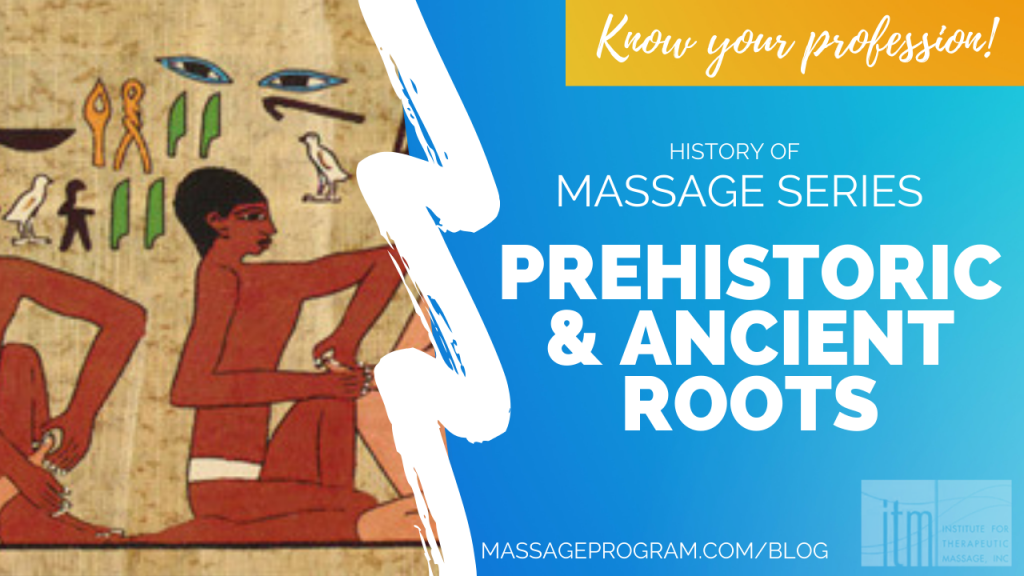 The history of massage is vast and varied. Massage is one of the oldest forms of healing, and the practice of massage is literally prehistoric. With such a multi-faceted history, the scope of the evolution of massage therapy is quite broad. Massage has served many purposes, including recreation, relaxation and enjoyment. And, for thousands of years, massage has evolved into a therapeutic and medicinal practice.

Today we begin with some of the ancient roots of massage therapy and bodywork. Before we begin, one very important thing to note: there is a lot of inaccurate information about the history of massage! Especially when we look at the ancient and prehistoric roots of massage, which touches every corner of the earth, or when we look at records from prehistoric periods, it seems some things have been lost in translation from different cultures. When learning about massage history, be sure to check your facts.

In this first installment on the history of massage, let’s begin by looking at some of the earliest pieces of evidence about the roots of the evolution of massage.

First, we will look at social grooming in the animal kingdom. In some ways, the social grooming behaviors we see in other animals is some of the loudest speaking evidence about how ancient the practice of massage really is! Next we will briefly review some of the pre-modern highlights in the history of massage.

Perhaps no evidence speaks as loudly to the ubiquity of massage than what we see in the animal kingdom. Many animals groom each other in the form of stroking, scratching, and massaging.

This activity, referred to as social grooming, often serves to remove foreign material from the body to promote the communal success of these socially active animals. There exists a wide array of socially grooming animals throughout the kingdom, including: primates, insects, birds, rodents, horses, cattle, cleaner fish and bats.

For example, inscriptions at the Tomb of Akmanthor (also known as “The Tomb of the Physician”) in Saqqara, Egypt dating back to 2330 BCE depict two men having presumably massaging one another’s hands and feet.

There are even primitive drawings of acupuncture points and meridians from the Neolithic (stone) Age of prehistoric China.

A millennium later, we begin to see the ancient roots of massage therapy. In India, textbooks on Ayurvedic healing practices, written between 1500 BCE-500 BCE, describe touch therapies. The Chakra energy system emerged in ancient India in The Vedas, also known as the Books of Knowledge, from 1700 BCE-1100 BCE. The energy anatomy of ancient Hindu and yoga traditions involve the chakras (energy flows) and nadiis, or channels, though which the life force (prana) flows.

In China, most likely during the late Warring States period between 475 BCE-221 BCE, the Huang Di Nei Jing was composed. This ancient Chinese medical text is also known as The Nei Jing or Yellow Emperor’s Inner Canon and has been treated as the fundamental doctrinal source and most important written work for Traditional Chinese Medicine for more than two millennia. Massage is referred to in 30 chapters of The Nei Jing, with different massage techniques specified for the treatment of different ailments and injuries.

Other ancient mentions of massage include:

A couple of other interesting facts about pre-modern massage: 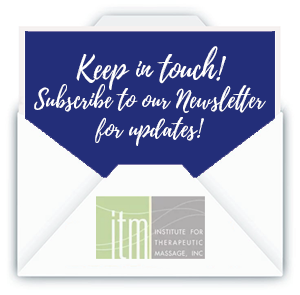 GET READY TO RENEW! Register Now!

GET READY TO RENEW! Get Ethics Course Now!